Put a small frying pan on a medium heat and dry roast walnuts until lightly browned and fragrant. Make sure you move them around the pan frequently as they burn easily. Chop roughly once cool.

Place balsamic vinegar and sugar in a small pot. Bring it to the boil gently and allow it to simmer for 20 minutes or so until the liquid reduces by about ½ and becomes thick. Beware that it will become even thicker once it cools so don’t let it reduce too much. If you do, add a splash of water to bring it back.

Heat up 3 tbsp of olive oil in a heavy base pan. Add finely chopped shallots to a hot oil (you want them to sizzle once added to the pan). Fry on a low heat stirring from time to time, until lightly browned. Add garlic and fry it off for a few minutes until soft and fragrant. Chop your mushrooms into a fine dice (you can also use a food processor) while you’re frying the shallots and garlic.

Add wine to the pan and allow it to cook out. Season the mushroom mixture with some of the rosemary salt and black pepper. Let it cool. Once cool, add chia egg and mix well. The mixture should be sticky but not watery.

Wilt spinach in a warmed-up pan with a lid. Once wilted, allow it to cool completely. Once cool squeeze all the water out of the spinach using your hands or a muslin cloth. Go over the spinach twice or even three times to ensure that it is as dry as possible. Place spinach in a large bowl, season with rosemary salt, pepper and nutritional yeast. Add shallot and garlic mixture you’ve set aside in step 6, ¼ cup of breadcrumbs and fold in toasted walnuts.

Flour the baking paper very lightly and place a defrosted sheet of puff pastry on it so that the shorter pastry edge is facing you.

Designate a long, narrow (about 10 cm / 4 in by 25 cm / 10 in) area where the filing mixture will be stacked. Place it about 5 cm / 2 in from the edge of the pastry so that the pastry on the other side of the filling is long enough to be folded over the filling. Leave 5 cm / 2 in margin at the ends too so that you are able to fold the ends nicely. Scatter a bit of extra breadcrumbs on the pastry, under the filling to prevent a soggy bottom 😉 .

Start the stack by making a long rectangle with the spinach mixture. Press it down well with your hands so that it is tightly packed.

Place four roasted beetroots in a long row over the spinach. For more stability, you may want to skewer all the beetroots together with a long wooden skewer, which you can pull out after cutting into the Wellington. Now mould the mushroom mixture over the beetroots making sure it fills all the nooks and crannies tightly.
Finally, fold the pastry over the filling as tightly as you can – it’s good to have another pair of hands here to make sure the pastry is tightly wrapped around the filling. Seal it together with the 5 cm / 2 in margin you left on the other side.
If there is too much overlap, trim the excess. Wrap the pastry at both ends like you would wrap a present. Make shallow cuts on the top of the Wellington with a sharp knife. Brush soy milk and aquafaba ‘egg wash’ all over the Wellington and sprinkle the top with your garnish of choice – I used black salt. Make three small holes in the pastry (on the side where the seam is) to ensure steam can escape during baking and the pastry does not burst.

Bake for about 60 minutes, until golden.

Serve with your favourite side dishes drizzled with the balsamic reduction you made earlier. 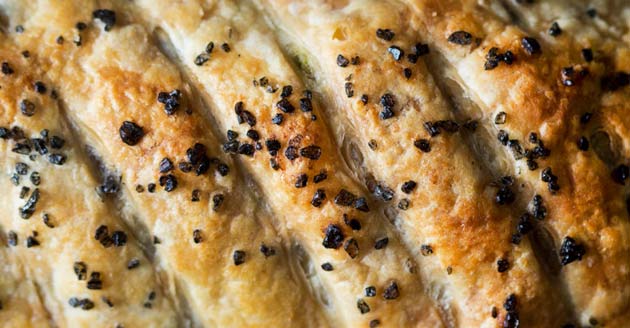 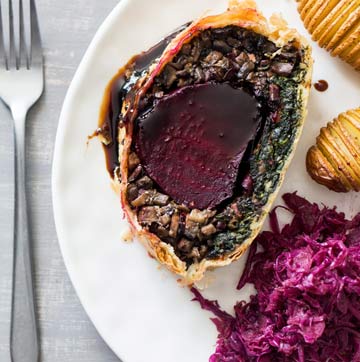 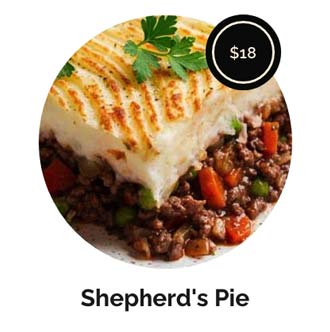 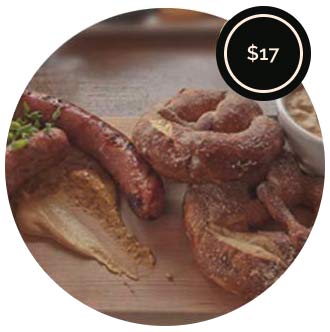